Nine students from the university’s graduate program in marine biology presented papers during the 45th Federation of Institutions in Freshwater and Marine Sciences Annual Convention held last month in Puerto Princesa, Palawan.
Institute of Environmental and Marine Sciences (IEMS) Acting Director Dr. Janet Estacion headed the group. All outputs were
accepted for presentation in different parallel sessions of the conference, which annually gather hundreds of researchers and
scientists from different parts of the country and Asia.
Dr. Estacion’s paper is an exploration of sandy communities, which she described to have been “mostly left unexplored,” with
marine research mostly focused on coral reefs, seagrass beds and mangroves. It particularly revolves on the “Population density of
Echiura (incertae sedis) at Enrique Villanueva, Siquijor”.
“This paper aims to raise awareness of the importance of sandy communities through the little-known incertae sedis Echiura,” she added.
The following graduate students shared results of their researches: 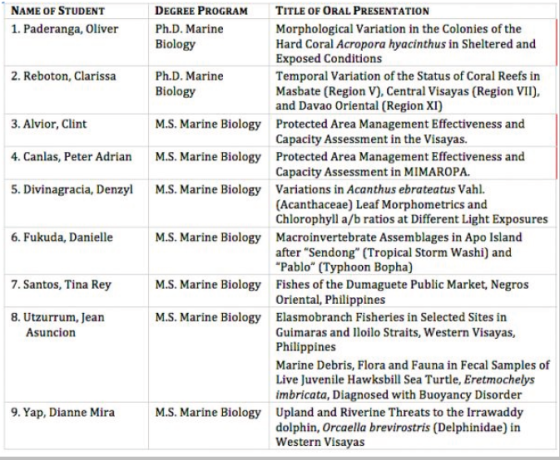