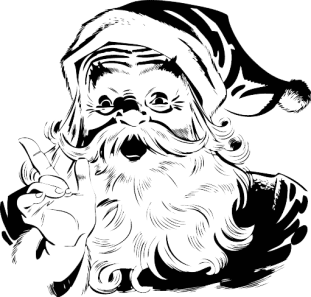 The tradition of gift giving is a very important element to the Christmas season. It teaches us the importance of generosity and how giving can be much better than receiving.

This tradition is done in memory of St. Nicholas, a fourth-century bishop from Myre (Demere now in modern day Turkey). He was well- known not only for keeping his faith in the midst of ruthless persecution from Emperor Diocletion, but also for his generosity–providing things to people who were less fortunate than he was.

Stories of his Generosity
Nicholas was born to a wealthy Christian family. When his parents died, Nicholas took the words of Jesus Christ, “sell what you own and give to the poor,” (Matthew 21:19) and set them in action. He decided to use his whole inheritance to help the needy, the sick and the suffering.

There were two popular occasions that showed how much he cared for those who were less fortunate.

In one occasion, three daughters of a poor man were about to be sold into prostitution due to  lack of dowry. A dowry is an amount of money that a woman must give to the man and his family before they wed. It can also be vice versa. Without a dowry, the women cannot get married. St. Nicholas happened to pass by the man and heard his problem. Later, St. Nicholas started throwing the bags of money through the windows of the man’s house. This amount of money was enough for all three of these women to pay for dowry.

These bags of money would usually land on stockings or shoes, thus giving rise to the tradition of hanging stockings on chimneys.

Another popular occasion of St. Nicholas’ generosity was shown in the story of three little boys. As they were making their way to Athens, the three boys came across a butcher who robbed and dismembered them. The butcher then left their bodies in a pickling tub. Mysteriously, St. Nicholas appeared and brought the boys back to life after praying earnestly to God. This story made St. Nicholas the Patron Saint and Protector of Children.

St. Nicholas was also known for saving people from famine, rescuing people for being  accused of crimes they didn’t commit, and  praying for the safe trips of sailors and voyagers.

St. Nicholas did many of his generous deeds in secret. He did not expect anything in return which earned him the title of “The Patron St. of Gift Giving.”

Transition to Santa Clause
How did a bishop, dressed in holy robes and seen holding a holy staff, suddenly become the image of a jolly red-bearded fellow who goes around the world in one night giving gifts to all of earth’s children? Believe it or not, this most iconic image of St. Nick was the product of the early Dutch settlers in the newly found New York City.

From this idea, Literature Professor Clement Clark Moore from New York, wrote a 56-line poem entitled “A Visit from St. Nicholas,” more commonly known as “The Night Before Christmas.” It is here where he first described Santa Claus as an American fur-wearing, pipe- smoking elf. This elf would carry a sack filled with toys that he would give to the children on Christmas eve. He was also given a sleigh towed by the eight reindeers.

Despite this being an iconic image of Santa, he still isn’t the jolly red giant we know today yet. Santa’s story of living in the north pole, having a toy factory, having a naughty or nice list, etc. still didn’t come into play. This was until New York illustrator Thomas Nast started putting these ideas on his illustrations for the Harper’s Weekly magazine.

It was then the iconic image of Santa Claus was born, appreciated by all children of different generations that  passed and yet to come.

Although the representation of Santa Claus has gone through many versions, the message of his character stays the same. Through him, we understand the message of giving and how it can affect those who need it the most.